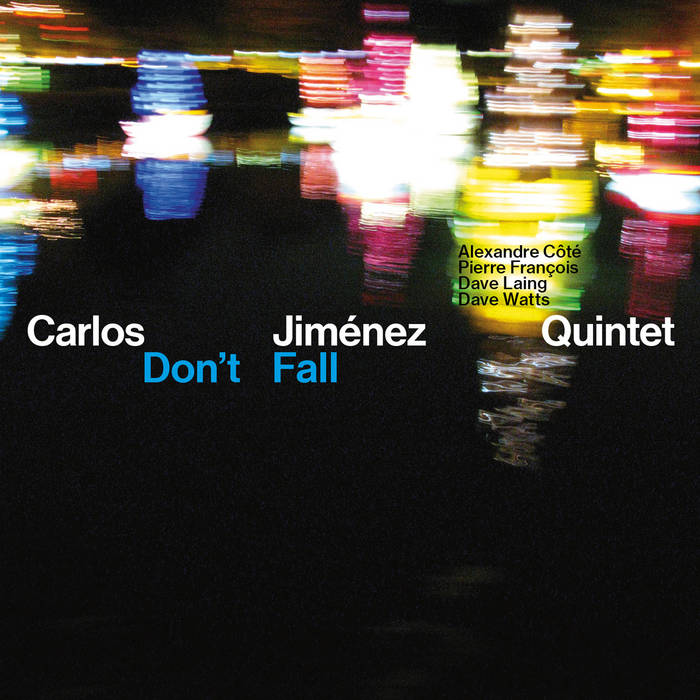 Five of Montreal’s finest musicians present an exciting new album of music inspired by Jazz of the 1960’s. A combination of originals and compositions by Wayne Shorter and Hank Mobley. A hard swinging band with a straight ahead vibe and a modern sound.

REVIEWS
Lyle Robinson, The Jazz Guitar Life, Online Magazine, April 3rd, 2021
I first came across the music and impressive playing of Montreal Jazz Guitarist Carlos Jiménez when I reviewed the duo album Voices featuring both Jiménez and another great Montreal guitar player Michel Heroux a few years ago. Well I’m happy to report that since then he has released a relatively new CD (2019) as a leader and his facility is just as notable, maybe even more so. In conjunction with his great playing, Don’t Fall also features the finest of Montreal’s Jazz artists performing alongside six original compositions by Jiménez plus a tune from both Wayne Shorter and Hank Mobley. Not too shabby indeed!

“Keep It Simple” starts the musical ball rolling and one immediately gets the sense that Jiménez has spent a lot of time developing his craft not only as a first-rate composer but also as a superlative Guitarist steeped in a tradition that goes far beyond the usual suspects ala Wes, Martino, Pass and Kessel. There is a modern approach to Jiménez’ writing and playing that brings to mind Dave Allen, Kurt Rosenwinkle, Jonathan Kreisberg and Lage Lund amongst other more modern fare writers and players. And while Jiménez’ tunes may be more harmonically dense – relatively speaking – than the requisite standards and progressions we’ve come to know and love over the years, let me assure you that his tunes are no less musical or swinging!

The title track is definitely a case in point as Jiménez and the boys lay the swing down solid with much credit given to drummer Dave Laing who drives the band hard through this tune like nobody’s business! His swing and energy is exciting and his talent huge as demonstrated near the end of the composition where he just powers through the tune full tilt. This is probably as close as Jiménez et al will ever get to recording a hard rock tune! “Don’t Fall” is definitely a highlight for me and it would be great to see them all perform it live in an intimate venue.

“The Fifth Element”, a tweaked out minor blues with a few twists, is another highlight for me and reminds me a lot of the Rosenwinkle/Turner era with some great frenetic blowing from saxophonist Alexandre Côté and pianist Pierre François. But for me it’s Jiménez who steals the show with a legato inspired lead in to his solo that is smooth as silk with just the right amount of overdrive going on for that smoothed out effect. And as mentioned above, Rosenwinkle and Kreisberg come to mind, but not in the notes he chooses, rather in the energy that he puts out. A great tune!

Keeping with the original compositions “Still Ringing (for Richard Ring)”* is a rollicking, somewhat quirky tune in 3/4 that not only features Jiménez and Côté but also the wonderful Double Bass playing of Dave Watts who gets to shine on this tribute tune to one of the great Jazz Guitarists of Montreal who sadly passed a few years ago. Watts’ solo is relatively short and sweet but melodic to a fault with some nice comping from Jiménez behind him. The remainder of the soloists also pay homage to Richard in their own inimitable way and I can only imagine that there must have been plenty of smiles, laughs and stories before and after the recording of this fun tune.

The final two original compositions “The Process”, akin to a Kreisberg style tune, and “Samba New Life”, with its cool call and response intro between Jiménez and Côté, maintain the same character and quality of the album up until now and showcase the unique voices and improvisational sharpness of all concerned. Some very fine playing indeed and Jiménez should be applauded for selecting not only a great group of players but also a group of great friends who have played alongside each other in a variety of circumstances over the years. The chemistry and their musical bonds help shape Jiménez’ compositions like they were their own, and that’s undeniably high praise.

The remaining two tunes which are not their own, Shorter’s “Virgo” and Mobley’s “East of the Village”, share the same expression and consideration and prove to be a nice selection to balance the overall vibe of the CD. Wayne Shorter’s “Virgo” receives a most sensitive reading with Côté sitting this one out as the quartet treat this song beautifully. Once again Watts gets to stand out towards the end of the tune as does Jiménez and François throughout the tune.

The last cut on Don’t Fall – “East of the Village” – belongs to Hank Mobley and is a great closer. Jiménez and crew keep it pretty close to the 12/8 Latin feel of the original, albeit a tad quicker which makes the listener want to move a little more! There’s no sitting still on this tune that’s for sure. Côté, Jiménez and François dig deep into the changes magnificently with some fine blowing from all while Watts and Laing keep the groove fluid and loose. A definite rousing end to a great session of tunes.

If Don’t Fall is any indication of what’s to come for Carlos Jiménez, then I can’t wait! Whether teaching, writing and/or performing, he appears to have a bright future ahead of him and I for one, look forward to his next project.

*“Still Ringing (for Richard Ring)” is a contrafact of the Kurt Weill tune “This Is New”.

Peter Hum, Ottawa Citizen Sept 4th 2019
The five Montreal-based musicians on guitarist Carlos Jiménez’s recently released album Don’t Fall are exceedingly well-schooled. All have either a Master’s degree, or a bachelor’s degree, or both, from McGill University’s jazz program. Come to think of it, Jimenez and his bandmates are also, like so many jazz players these days, revered educators.

But there’s very little academic or ivory tower about the music on Don’t Fall. Granted, on Jiménez’s album there are choice tunes by Wayne Shorter (Virgo) and Hank Mobley (East of the Village) that attest to jazz erudition. Indeed, McGill, specifically some years ago when the guitarist, alto saxophonist Alexandre Côté, pianist Pierre François, bassist Dave Watts and drummer Dave Laing respectively attended, was known for enshrining bebop, hardbop and postbop on its curriculum.

Still, what shines through on Jimenez’s album is how much he and his peers have internalized the jazz tradition, making its fire, flow and swing their own.

The bulk of Don’t Fall consists of six originals by Jimenez. The album opens with Keep It Simple, a meaty, swinging tune with a piquant, yin-yang sense of harmony. Come solo time, Jimenez is poised and incisive and then Coté is swaggering and passionate. The title track charges harder and faster, swapping episodes of bracing swing and punchy funk before Jimenez, Côté and François show off the bopping eloquence they can muster at a bright tempo.

The Fifth Element is a twisty 5/4 minor blues that keeps the album’s tension high until the delicate Shorter-penned ballad releases it. Côté sits this one out, allowing Jiménez with his glowing sound and then François to step forward.

Still Ringing, Jiménez’s tribute to the late Montreal guitarist Richard Ring, is a 3/4 contrafact on This Is New, which supplies bassist Dave Watts with a wending harmonic path to negotiate before Côté torches the joint and Jimenez and François offers more burnished solos.

While Jiménez on his website describes Don’t Fall as an album “inspired by the jazz of the 1960s,” I think there’s an appealing touch of the 1990s to the theme of The Process, which admittedly pivots back to rangy swinging.

Jiménez and his quintet launch Don’t Fall on Friday, Sept. 6 at 6:30 p.m. at Diese Onze in Montreal. If I could, I’d plant myself down in a seat there and brace myself for an exciting, invigorating set.

Jazz guitarist and composer, Carlos Jiménez is a very active musician on the Montreal jazz scene. He has shared the stage with some of the most expressive names of Canadian jazz. His versatility and ability to play various styles on both electric and classical instruments has made him a first choice guitarist for various projects. Carlos currently teaches Jazz guitar at McGill University. ... more

Bandcamp Daily  your guide to the world of Bandcamp